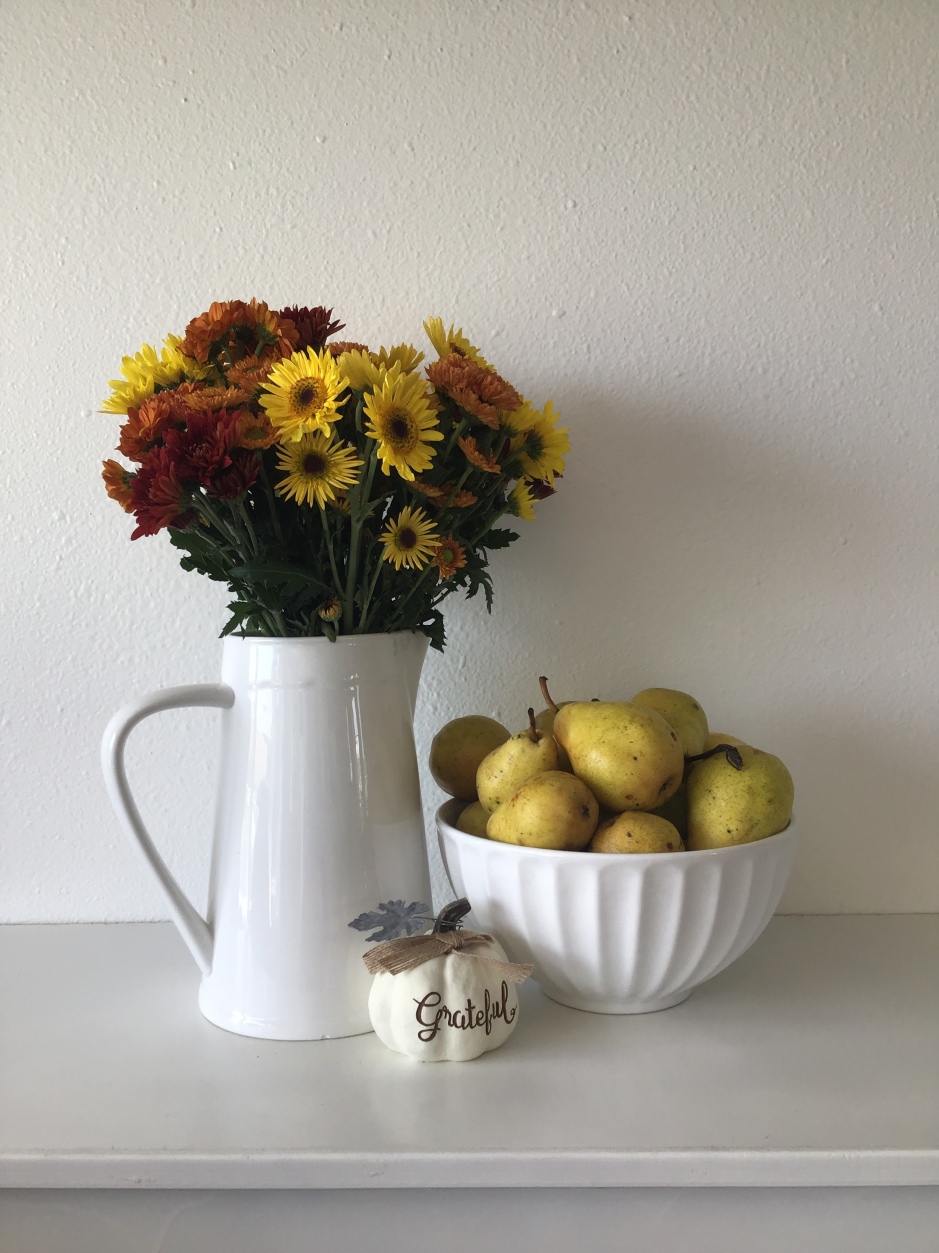 Last week was saturated with work. (As though there’s many weeks that aren’t!) And now this week is chucked full with something going almost every night. I randomly bake cinnamon rolls and pumpkin pies to sell and had wanted to do that this week again. Wednesday evening I gave that up. I’ve been too busy and snappy with my children, besides not spending enough time with them. Thursday I decided to not be in a hurry. It felt lovely.

I needed a few groceries in town, so decided we’ll all go to the store and then stop at a few little shops in search of a candle, because I really needed one. Reece woke early, so that meant mom’s night was finished too, even if it wasn’t. So I thought, Ok, I’ll get a good start to my day, get the laundry going and surely we can get left for town by 9. Josie was trying to brush out her own hair, the wash needed changed and Reece had another pooped diaper, credit to a case of diarrhea this week. But I thought he was over it. (This was also the reason for waking mom early because his bottom needed assistance) Every time I’m by myself trying to get all of my two children out the door I give a mental sigh of how it must be to get, say, four or five children out the door! Would I even be able to get left before lunch?! Ok that’s a bit exaggerated but you get the idea. Eventually we got left, but not at 9. Sun-mart was not busy, for which I was grateful. If you want to exacerbate the events of shopping with children, go to the store when it’s rush hour.

I’ve been inwardly lamenting that it’s fall and I don’t even have any nice smelling candles to burn! I usually burn soy candles because their not toxic like the average synthetic ones. But those are hard to find and I forgot I was out of my favorite kind, until I went to pull it out and discovered it wasn’t there! Now, the second reason for getting a candle is embarrassing. You know those little gray critters that seek for shelter in cold weather? One or two invaded our house and then just up and died behind closed doors. No, he missed the traps, and definitely hid well, because it smells like he’s behind the dishwasher or under the cabinets where it’s nigh to impossible to get to! And oh what a smelly predicament! I threatened to Jerald I’ll pull out the dishwasher myself to get it out! Unfortunately it only remains a threat because I of course, am not a carpenter. So I succumbed to fresh air and, yes, a candle! The mice know just when to die without being embalmed- usually just before company comes, which was Thursday night. Fresh air? Yes! Essential oils diffused? Yes! Candle burning? Yes! Mouse corps? Uhh… yes still kind of….😤

But it was still a good day! Someone told me this new coffee shop in town has candles. So we trotted down the street to check it out. I immediately decided we would take time to get drinks too. I explained to the lady I’m not big on coffee so she kindly offered to put in half of the usual espresso. That really helped out my taste buds and I enjoyed a salted caramel latte. It’s been my history of getting flopped drinks at coffee shops and feeling disgruntled at the money spent but not enjoyed, so this was an exceptional accomplishment. The children shared a hot chocolate which she only warmed, instead of steaming hot. A second kind gesture. Hey, I believe I’ll patronize this place some more! I also had the chance to visit with an older couple who was in there. Would I have taken time for this if I had been going at the top notch speed I often do?? They loved the children…. Don’t children often make for good conversation?! I also invited them to church for the evening service because we had a chorus group coming to give a program. Oh. And yes, I even found a candle! No, it’s not soy wax as I normally get but since it was direly needed, I made an exception.

Late afternoon the children and I also made a small batch of healthy No Bake cookies. Of course we had a mess because there was chocolate, oatmeal and 20 little fingers involved. Remember: pictures don’t do justice.

This was supper one night this week. Love fall!! Carmalized sweet potatoes and apples and fresh salad with greens off the tower garden! Josie chopped the lettuce and prepped our salads. She felt important and thoroughly enjoys helping make food.

Using a cast iron skillet, melt oil and fry potatoes till about soft. Add in apples, stir and cover pan for a few minutes. When both are soft, stir in remaining ingredients. I like using a crisp apple like Fuji or Honeycrisp. I’ll often sprinkle in a little stevia too, if I think it’s not quite sweet enough. Feel free to adjust the salt and cinnamon too, to suit your own taste because that’s how I cook! In fact, I find it a little hard to write out recipes exactly like I make them because its very likely to vary a bit from one time to the next!

This is our aeroponic tower garden. In the winter we keep it inside and grow greens all winter long, using grow lights. If your interested in one, just email me! Because we can certainly get you one! 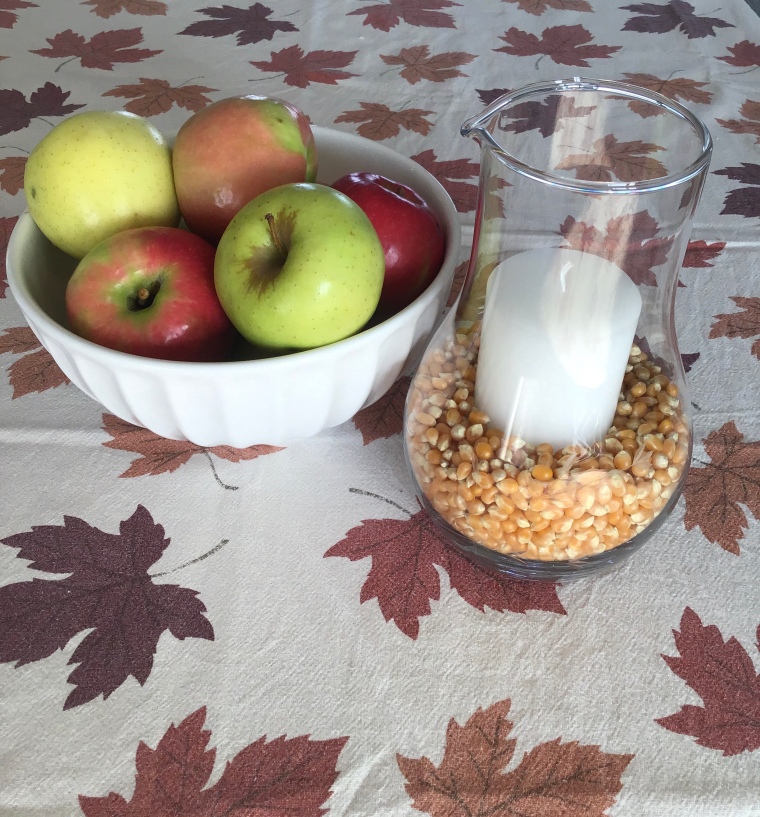 Cinnamon sticks glued onto a candle looks really fallish. I actually used masking tape inside out, just so the cinnamon sticks stuck a bit, then tied jute cord around to hold it on. I topped it off by glueing on a whole anise star. A dried orange or apple slice would look pretty too! It would probably be best to use cinnamon sticks on a battery operated candle, since it could be fire hazardous when the candle burns. But if you just want it to decorate, it’s fine and dandy! I haven’t burned this candle yet. And by the way, these are only the simple, unscented pillar candles.

Isn’t Autumn a wonderful time of the year? Go on a brisk walk and enjoy the brilliant leaves. Breathe deeply and thank God for lungs to breathe fresh air, for eyes to behold the beauty, and for the sense of smell to sniff that unique autumn scent! Savor a drink in the dark quiet of an early morning. Ok. Really. I need all this advice myself. This time, your welcome to listen in on my mind’s lecture. Other times, not welcome. I tend to have whispered sermons when I go on my strolls, discussing with myself and God about whatever concerns me at the moment.

We’re having weekend meetings and I was reminded again in last night’s message of the importance of slowing down! We can’t hear God when we’re going 100 miles an hour in our mind and work! Be still and know that I am God…. Psalm 46:10

Join 223 other followers
Follow of windowsills and breezy hills on WordPress.com